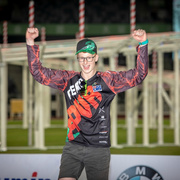 The high school student from Brisbane beat 127 other drone racers from 34 countries to win the first ever FAI World Drone Racing Championships held in Shenzhen, China in November 2018.

“It feels absolutely amazing,” he said afterwards. “I dreamed of this, and it is incredible that it has come true. I couldn’t be happier.”

The final of the FAI Drone Racing World Championships came at the end of a four-day competition held in the Shenzhen Universiade Centre Stadium in Shenzhen, the Chinese tech-city known as the heart of the drone economy.

Browning beat three other drone pilots in a fast-paced and adrenaline-fuelled final. He finished ahead of Bastian Hackl from Austria, who came in second and won silver, and Karlie Gross from Latvia who won bronze.

“I am a very competitive person and I aim high,” Browning added. “The goal was to win everything I could. A lot of luck comes into it, as well as skill, so everything came together and I am super happy.”